Cognac is a variety of distilled brandy (alcoholic beverage) named after the town of Cognac in France.

Cognac is produced in the wine-growing region surrounding the town from which it takes its name, in the French Departements of Charente and Charente-Maritime.  For a distilled brandy to bear the name Cognac, its production methods must meet certain requirements set by the Bureau National Interprofessional du Cognac (BNIC) . 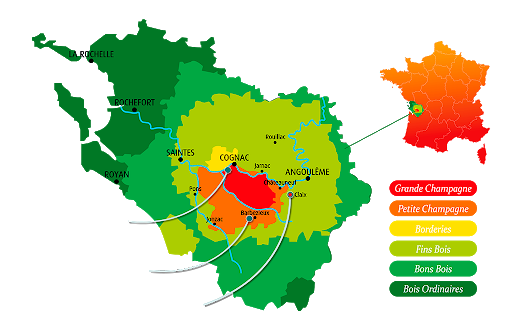 WHAT GRAPES ARE USED TO MAKE COGNAC?

In particular, it must be made from specified grapes, of which Ugni Blanc (known locally as Saint-Emilion) is the one most widely used. Cognac is made mostly from grapes called ugni blanc. Ugni blanc gives us acidic wine that is low in alcohol – between 7.5 and 10.5%. So this is used to only create cognac, not to drink it. There are other varieties that are used named folle blanche and colombard. But about 98% of cognac is ugni blanc. 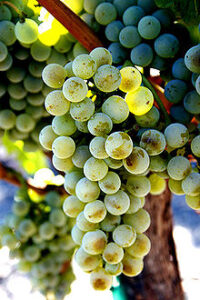 HOW IS COGNAC DISTILLED AND AGED?

The brandy must be twice distilled in copper pot stills and aged at least two years in French oak barrels from Limousin or Tronçais. Cognac matures in the same way as whiskies and wine when aged in barrels, and most cognacs are aged considerably longer than the minimum legal requirement. 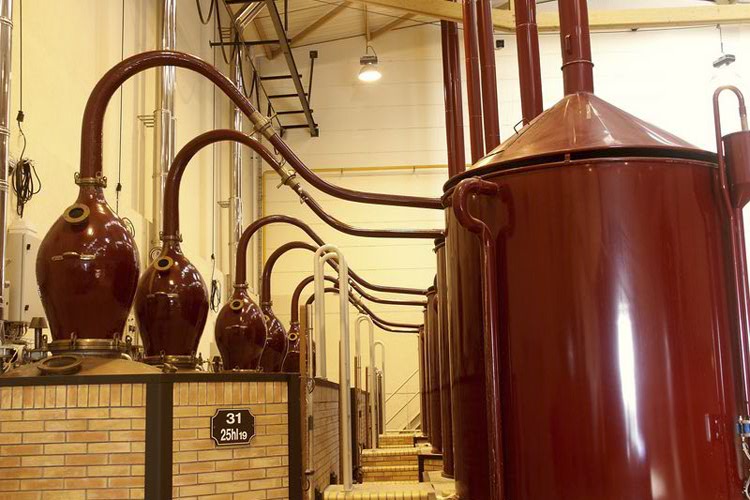 This area is made up of 73,000 hectares (180,400 acres) of vineyards of which there are six different growing areas. Grande Champagne is known for making powerful cognacs. The second area is called Petite Champagne, and it is known to make elegant cognacs. Borderies is the third area, and makes well-rounded cognacs with violet aromas. The fourth area is called Fin Bois, and makes fine and elegant cognacs. The last two areas are named Bons Bois and Bois Ordinaires.

Grande Champagne and Petit Champagne both have chalky soils. Hence the use of the word Champagne (derivative of the word “chalk”). (This is not to be confused with the Champagne region of France known for producing sparkling wine.) Cognacs made from grapes of either, or both Grand Champagne or Petit Champagne are called Champagne Cognacs. In Borderies and Fin Bois, there is a thin layer of clay before the chalk soil. And that gives those areas different characteristics.

From November to December, the grapevine lies dormant. Around March, the vine begins its bud breaking. By mid-May, the first leaves appear. Mid-June marks about 100 days before the harvest. Mid-August is 45 days before the harvest – the grapes are getting bigger. They become translucent and they gorge with sugar. And the harvest starts at the end of September or early October.

ABOUT THE ‘UGNI BLANC GRAPES’

Because rules and regulations are followed for cognac production, a quick harvest is required. After the harvest, grapes are pressed using nomadic presses. In the older days, a big press was used to crush the grapes, but it would leave seeds and skins in the wine that gives bad flavors. And because of this, it is not used anymore. Nomadic presses burst the grapes preventing the seeds and the skins to go into the wine. The residue of seeds and skins are then used as organic fertilizer for the vines. And it also can be distilled to make alcohol for pharmaceutical needs.

After the crush, concrete vats were used to store the wine for fermentation. Today stainless steel vats are used. For the fermentation, yeast is added. As a result, the wine has a low alcohol content between 7.5 and 10.5%. And due to the regulations set up by the BNIC, this wine has to be distilled before March 31st.

To make Cognac, the white wine goes through a double distillation process. The distillation has to be made always in a Charentais pot still which is made with copper. Each distillation takes about 12 hours. The wine is placed into the boiler and heated by gas. The vapors go up to the head still, cross the swan’s neck pipe into the wine warmer, and then arrives at the cooling coil. This cooling coil will be flushed with cold water to condense the vapors. These vapors then turn into the first liquid, having an alcohol content of 27% to 30%. The first liter (the head) and the last liter (the tail) are removed and that liquid is distilled again. At the end of the second distillation, again the first liter and the last liter are removed. The “heart” of this liquid has reached 70% alcohol. This is called eau-di-vie. To make one liter of eau-di-vie, it takes nine liters of wine. That takes twelve kilos (26.5 pounds) of grapes to produce that amount of wine. This process is the same as it was when the cellar masters created this process in the 16th century.

Cooperages in the region make the barrels for cognac and wine makers. These coopers saw the oak wood with respect for the grain of the wood to ensure the water tightness of the barrel. The coopers remove the bark and the outer layer of wood as well as the heart of the wood because it gives off bad tannins. So only the mid-section of the oak tree is used to make planks. These planks are aged in the open air for three years – in frost and rain. By doing this, it is washed of the bad resins in the wood. The wood comes from central France from the forests of Limousin and Tronçais. Please note that some distilleries may use oak barrels from other countries like Hungary. 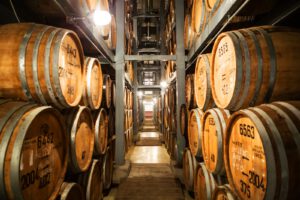 With 300,000 barrels to keep track of, there is a system on how these barrels are marked. The first line is an information code. The second line is the year of the harvest. The next line designates the growing area. For example, “GC” would be Grande Champagne. The next line is the producer or the distiller of the eau-di-vie. That is followed by the count of the barrels in that row. Next to that number is another number that designates the capacity of the barrel. The last line is the number of the row into the warehouse. That is a lot of information to track.

The eau-di-vie gets moved from barrel to barrel once a year or every other year, depending on the flavors. Moving the eau-di-vie from barrel to barrel is done by hand. They do have to move them every year to get the sample for the cellar master and the tasting committee. Also, by changing barrels every so often, the barrels are filled back up to accommodate the evaporation of the angel’s share. They take a barrel from the same batch and fill up the others.

The very special and very old eau-di-vies are stored in a very special place called Paradis. They will still age and improve through the years. It is up to the cellar master to decide how long to leave the eau-di-vie in the barrel. And when the eau-di-vie has completed the aging process, it is put it into demijohns, also known as glass bottles. Once the eau-di-vie is no longer in contact with the wood and the oxygen, it doesn’t age anymore. And when the aging is stopped, the colors and the flavors of the eau-di-vies no longer change. If you buy a bottle of cognac today and open it in ten years, it is the same and doesn’t change at all. These aged and older eau-di-vies that are kept in the Paradis are used and blended for the higher end cognacs.