Glenfoyle was one of the blended Scotch whisky brands produced by Longman Distillers, a subsidiary of Invergordon Distillers, which handled the group’s export business since its creation in 1960. It was named after a distillery near Gargunnock that closed in 1923. Now it’s in use as a warehousing facility for the output from Tullibardine distillery, Glenfoyle is, a premium blended whisky under licence from Tamnavulin-Glenlivet Distillery Co.

Glenfoyle is a traditional Scotch whisky made from a blend of malt and grain distillates that have been aged in oak barrels for a minimum of 3 years. The 12 years old is matured in Oloroso sherry casks. 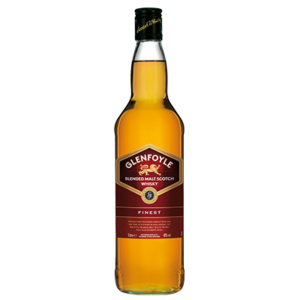