Most often used when referring to wine, the word terroir (pronounced tare WAHr) describes the effects of localized natural environmental factors on the final taste of a product. The phrase “sens de lieu” (French for “sense of place”) is also used to describe the effect of climate, soil, terrain, and tradition that affect the resulting beverage.

This same concept plays into the general character differences in single malt Scotch whisky found in the various regions. Each region produces scotch with general taste profiles, though even within a specific area one single malt can be very distinct from another. In Scotland, there are five regions for single malt scotch, though a sixth is often added to distinguish the whisky produced on “The Islands” from those of The Highlands.

Single malt scotch from the Lowland area is a perfect introduction into the world of Scotch whisky. It encompasses the southern third of Scotland and the whisky is often likened to Irish whiskey.

These tend to be the smoothest, offering a light floral taste with a gentleness that’s very approachable. Tradition plays a role in this area because most (not all) are triple distilled and they are generally unpeated. The majority of the whisky produced here is used for blended whisky, though a few single malt producers remain.

The Speyside region sits on the northeastern end of Scotland. It is the country’s geographical center, surrounded by The Highlands, and encompassing much of the River Spey. It’s a relatively small area, but it boasts the highest concentration of whisky distilleries in the country.

The single malts of Speyside are considered the most elegant of the lot. The whisky is surprisingly diverse for the area, though generally characterized with honey, hints of spice, and light smoke. You’ll find whisky with light, grassy profiles and sweet, rich whisky finished in sherry cask. Some have a complex, very refined smokiness while others are completely devoid of peat.

The largest region for single malt scotch is The Highlands and this is where things really get complicated. Encompassing the majority of mainland Scotland, the area reaches from the northern sea to The Lowlands and from east to west, where it includes many of The Islands. With such vast territory, the whisky produced there is quite diverse as well.

Generally, Highland single malt whisky falls right in the middle of the spectrum of scotch: it is neither too smoky nor too delicate and is not overly rich nor light-bodied. If there’s a happy medium within the world of scotch, it’s found in The Highlands.

Off the west and north coasts of Scotland are a series of islands (or isles) that are technically part of The Highlands. However, the whisky produced there is so distinct that it’s often categorized into the sixth region simply known as The Islands. This includes the whisky-producing isles of Orkney (to the north), Lewis and Harris, Skye, Mull, Jura, and Arran. Islay is also an island, but a whisky category of its own.

Surrounded by salt water, the whisky produced on the islands tend to be bold and either briny or sweet, with a striking balance of salinity and peat smoke. They’re quite fascinating to taste against the other single malts and the effects of climate are immediately apparent in many of these complex drams.

On the western side of mainland Scotland lies Campbeltown, the smallest of the five scotch regions. The Kintyre peninsula was once filled with distilleries and produced the most whisky, though only three remain today. “Wet wool” is often used to describe these briny, smoky whiskies and they’re also noted for being dry with vanilla and toffee flavors.

The Isle of Islay is where you will find the peatiest, smokiest single malt scotch. The whisky from this island off the west coast is very distinct from all others and shows the marine characteristics more than any other, often described as oily, salty, and somewhat medicinal or iodine-like. 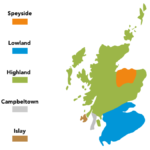